The UK Fire Service College failed to comply with fire safety laws when part of its own premises burnt down, the BBC has learned.

No current fire risk assessment was in place when a blaze causing more than £1m of damage hit the facility.

No-one was hurt but more than 60 firefighters were called to the premises in Moreton-in-Marsh, Gloucestershire, in May 2009.

Eleven fire engines were lost and the garage housing them was destroyed.

It has been a legal requirement to do a “suitable and sufficient” fire risk assessment on almost every type of building in England and Wales since 2006.

“It’s not exactly a new piece of legislation so yes they should have done it,” said the architect and safety expert Sam Webb.

“If anything, their standards should be higher than anyone’s. At the end of the day alright there were fire engines lost and they can be replaced. When it is people that are lost then it’s a different matter.”

It is a criminal offence not to comply with the Fire Safety Order, punishable by fines or even a prison sentence.

Such checks are vital as they can identify problems which might cause a fire to spread and determine whether existing evacuation procedures are sufficient.

More than 60 firefighters were called to the college in Gloucestershire

Following the fire, an inspector carried out a fire safety audit of the appliance bay, or garage, which was destroyed.

The college has said that a number of shortcomings were identified, including the absence of an up-to-date fire risk assessment, which have all since been put right.

None of those shortcomings constituted a threat to life and, the college said, “no further enforcement action was considered appropriate”.

The BBC understands that a risk assessment had been done on the bay five years previously under old legislation.

The college was in the process of completing up-to-date fire risk assessments when the fire occurred.

Those which had been done were on areas viewed as posing a greater potential risk to life in the event of a fire, including the college’s sleeping accommodation.

The Fire Service College uses the slogan “Unrivalled experience. Unequalled expertise” and is the place where fire fighters from England and Wales go for training.

It also welcomes crews from Scotland, Northern Ireland and from all over the globe.

It is an executive agency of the Department for Communities and Local Government and describes itself as performing a “vital role at the heart of the UK Fire and Rescue Service, providing essential support by equipping the Service, and the people who work for it, with the skills required to make a positive difference in the communities they serve, and to save lives.”

The Fire Service College is the latest organisation found to be wanting when it comes to complying with the law on fire safety.

In January this year, BBC Radio 4’s Face the Facts reported on landlords – including some local councils – which had failed to do up-to-date fire risk assessments on many of the residential tower blocks which they own.

The programme found no evidence of a current risk assessment having been done at Lakanal House in Camberwell, south London, where six people – including three children – died in a fire in July 2009. 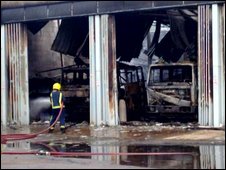 The flames spread quickly up and down the 14-storey building owned by Southwark Council. Whether the presence of an adequate risk assessment would have made any difference that day is likely to be something the police are considering.

Their investigation into the fire is still going on and is not expected to conclude until June, when a decision will be made as to whether any prosecutions should follow.

You can hear more on this story on You & Yours, BBC Radio 4 between 12 and 1pm, Thursday 11th March, or listen again on iPlayer.